Home » Blogs, News, Advice » A Discourse of One’s Own: Unfiltered Anecdotes by Women in Law

Words like misogyny, patriarchy, male dominance, sexism and many more are synonymous with gender inequality. No matter their weight, these words can never be exhaustive of a woman’s experience with discrimination. The language of subordination is often controlled by masculine figures. In its place, we bring to you the language of resistance narrated by women in the courtrooms. In a survey conducted by Lawctopus and Academike, several women voiced their interactions with the law and society. We have kept their identities anonymous for the sake of privacy and irony. 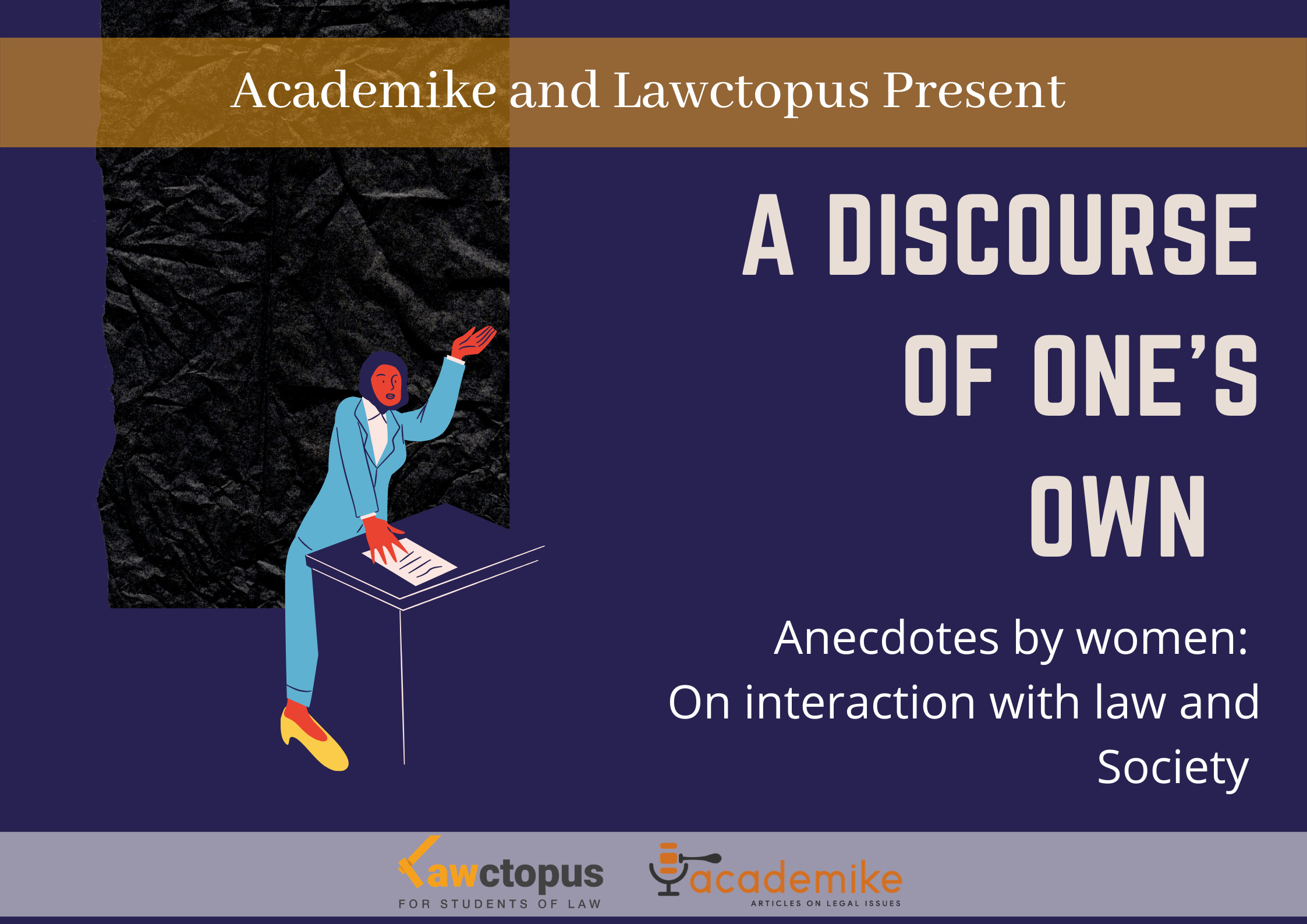 Women are yet to witness a lot of freedom and a lot less crime. Somehow, women who came before us, made it easier for us to fulfil our dream of being and becoming.

Looking at the data on crime against women, one can’t parade for freedom or liberty. One cannot claim equality. Therefore, in spaces fraught with patriarchy and masculinity, women’s achievements need to be celebrated.

When women interact with the law, they become more than ‘things’. They challenge the rigidity of a paternalistic courtroom. Just by way of speaking and being, women challenge norms.

The month of March is observed as Women’s History Month. To commemorate the same, Lawctopus platformed the voices of women who interact with the law. We discussed the women in court, not only as lawyers or judges but as victims, witnesses, Ahlmads and as gendered bodies.

Lawctopus celebrated Advocate Geeta Ramaseshan’s contribution to the legal profession and human rights. In our conversation with Advocate Ramaseshan, she narrated her experience of the courtroom. She spoke about family law and how women still have to navigate narrow courtroom aisles saturated with the male gaze.

Advocate Ramaseshan entered the courtroom about thirty-seven years ago, at the time when there were hardly any women in law who weren’t victims or witnesses. Women like Advocate Ramaseshan have paved the way for many women lawyers who came after her.

To commemorate the exit of ‘women’s month’, we are platforming the voices of many women who continue to struggle because of their gender and caste.

Struggles of Being: Experiences of Women in Law and Courtrooms

In our survey, ‘Are you an outlier?’, we asked women if they have ever felt like an outsider or struggled to inhabit the world. One respondent wrote:

“Yes, I have always felt like outsiders in this society. Maybe because, according to the standards set by society, I am not that beautiful or soft-spoken. Just because I am a girl and I do not conform to societal norms, no one accepts my boldness.

I am a Law graduate, currently pursuing my Master’s in Law from a reputed institution. But all that people need to know is when am I getting married? No one is interested in my achievements, nor academic and neither professional. I feel it’s mostly because I am a 25-year old girl.

This is our Indian society!”

Another respondent spoke about her experience of being a lawyer. And constantly struggling to make a mark.

“Being a woman in a man’s world is quite difficult. As a lawyer, my personal experience is not so good. The two main issues that I have faced on regular basis are lack of basic hygiene and washrooms in the court premises. There are no separate washrooms for women. Misogynist mindset of the male colleagues is another barrier.”

“Where she could see the sunlight

Only from the lattice windows.

Domesticated into drudgery she is just

Another territory, worn out by wars”

To be a Dalit woman in Indian society and courtroom is a lot more debilitating. There seems to be an umbilical link between Indian courts and households. Both institutions often mirror each other, reflecting patriarchal values and morals by treating women as third-class citizens. Thus for Dalit or tribal women, the graded discrimination is more brutal and explicit.

Two of the respondents voiced their experience regarding the same.

“Yes, as a woman born and brought up in a Buddhist family, getting married to a Brahmin man was tough. I faced so many unacceptable things just for being from a lower caste, it was so disheartening. But I fought back hard.” -Respondent (one)

“After having courtship for 5 years with a brahmin boy and finding cheated after he refused to marry just because of my caste was devastating. I simply asked him, ‘why didn’t you see my caste when you were in a strong mental and physical relationship with me for 5 years?’

He wasn’t brave enough to answer that but ultimately I found that he is genuinely in love with me. I stood firm, despite resistance from his family, we finally got married after eloping to Hyderabad. It took one year in hiding but finally, my marriage worked. And I am happily married to the guy I loved most for the last 19 years. I have two beautiful children who have grown up in a liberal and nondiscriminatory environment.”

What Solutions Have You Come Up With? What Works for You?

When we asked if they had any solution against such routine discrimination. It’s only ironic that instead of expecting a change from within the society, most women tended towards strengthening themselves.

One respondent spoke against discrimination in the courtrooms, which is often masked under liberal pretence. Though men need more sensitization than women, you can see the latter compensating for the former’s ignorance.

“There should be counselling to boost up women’s confidence.”

Some of them claimed that they have stopped looking for a solution. You could call it fatigue, cowardliness or lack of willingness. We will call it quotidian and banal forms of discrimination.

“I couldn’t come up with a solution. I just started to ignore them and focus on my aim and ambition. But it is a concern that never leaves my mind and affects my daily life too.”

“Clear communication, affirmations and confidence, self-belief and firm thoughts on humanity have pulled my courage so far. It worked for me”

One of the respondents even spoke on behalf of women who are often neglected based on ‘household’ work.

“Give her salary for doing household chores for work done by her, so that maintaining a house is recognized”

One of the respondents spoke about her privilege. She apologetically wrote that she didn’t experience explicit sexism and gender discrimination. Even though she had heard stories of masculine bigotry, she had not experienced them first hand, as ruthlessly as others. It’s only pitiful that women are led to believe that if they don’t experience extreme forms of discrimination and violence, they are privileged. Sadly, no one tells women what equality looks like, we are still struggling for basic human rights.

“I was born to wonderful parents who have always treated my brother and me the same. Surprisingly, I wasn’t discriminated against for my gender (or any other aspect of my background)  in school or college. Even now as a student of law, I’m constantly appreciated by my teachers and classmates for my efforts.

It’s not like I haven’t heard sexist remarks or haven’t been inappropriately touched, but I can in no way deny how privileged I’ve been. Yes, I’ve been extremely privileged, compared to the common Indian woman who has to cross innumerable hurdles just to protect her basic human rights. I was not forced to marry at an early age and was allowed to continue my education.

It’s a pity how not being denied your rights as a mere human being has become a privilege in our country but here we are. I know I’m in a position to speak for myself unlike the women who haven’t been as lucky. And I’m more than willing to learn how I could be of help to them through my profession.”

Women are often derided for not being enough. They are mocked for- working too much, spending too much, speaking too little and talking too loudly. Women are ridiculed for having an opinion and voicing it. No matter what she does and regardless of who she is, a woman will always be less than, more than, not enough and too much.

For the sake of equality and the sake of celebrating women, stop describing women through quantifiable adjectives. Instead, stand with her but don’t speak for her. Just give her the mic.

Instead of prescribing the kinds of feminism women must adhere to, fix yourself. For the same reason, we are leaving you with a question that one of the respondents asked:

“Why do we fear before joining any professional field? Does this happen only to women?”

Sonali Chugh
Sonali has a Master’s in Law, Politics and Society from Ambedkar University Delhi. She has a background in Journalism and Mass Communication. She has worked in several news media organizations, including Indian Express Pune. She also designed a 360-degree advertising campaign for the National Commission for Protection of Child Rights (NCPCR). Consequently, she bagged a job as a project-based media advisor at the organisation. She loves theatre and improv and theorizes everything in her reach. Her spirit animal is a koala bear, as she loves to sleep and hang upside down.